What You Don't Know About Actors - But Should. 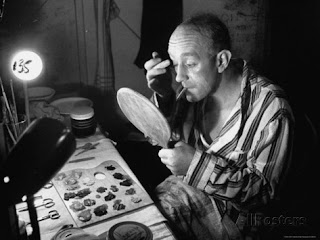 Now that Halloween is over, I can safely wade back into this topic without be called a curmudgeon -- or an asshole. But right now I'm going to lay a little truth smackdown on you.

Every year for the past...well, let's say since college, I have been asked what I'm "going as" for Halloween. "You're an actor, you must LOVE Halloween!" Obviously, everyone thinks that actors must just LOVE Halloween because of the dressing up. Not so, Grasshopper. Not all actors like to play dress up for this night of spooky shenanigans. Some do, yes. I know some of these people and they are nice humans and good actors and I like them. They usually do an amazing job of building costumes, too. They have fun doing it. Great. But for some of us, the idea of putting on a costume when NOT in show of some kind makes our skin crawl. I am one of those. I have nothing against All Hallows Eve or those who like to squeeze into a Naughty Viking Girl outfit or smear bloody zombie goo all over their Walking Dead ensemble. Fine. Just not for me. I can't tell you how many parties we have passed on because they were "costume required" affairs. Please understand, this is nothing personal. We do like parties and we love to have fun with our friends. But, no thank you under these conditions.


Do we decorate our house? Yes. Do we have the best candy in the neighborhood? Uhm, yeah. We also make sure to compliment (sometimes by acting terrified) of each and every little kiddo that comes trick or treating. I like Halloween. I'm just not dressing up.

Does this surprise you? Probably. Here are some other surprising things you may not know about us actors.