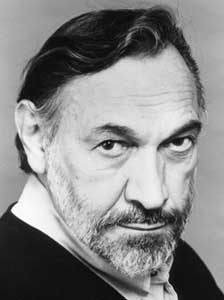 Right after acting school, I got a job as a waiter. Of course. But, after a couple of years of slinging tostada salads and  #2 combos (one taco, one cheese enchilada, rice and beans) I got tired of my clothes smelling like lard and my fingers like parsley. That and the fact that memorizing celebrity cocktail preferences was never my bucket of ice. (Dean Jagger did like his Ramos Fizz, though.) One day, after the perfect service of a very complicated special order, Dustin Hoffman stiffed me. Well, his wife stiffed me. Ratso Rizzo sat there and let her. That was the last burrito.

Lucky for me, I got a job at the Mayfair Music Hall in Santa Monica. The Mayfair was beautiful old girl. A delightfully garish old relic straight out of the Hollywood history books. Smelled like mold and old books. It sat boarded up for years after the Northridge quake and was finally razed a year or so ago. Very sad, indeed. My wife and I went by one day to try a swipe a brick out of the ruins but couldn't get over the fence.

The new owners at the time were trying to make a go of turning it into a legit house. Alvin Epstein directed Bud Cort in "Endgame," Phillip King performed his one-man "A Dicken's Christmas," the brilliant Jasper Carrott and the legendary Charles Piece both came in for special one-offs to pay homage to the music hall roots of the place. (If you don't know who either of these performers are, Google them. You're missing out.) And then..."Sherlock's Last Case." It was directed by the play's author, the irascible and eccentrically brilliant, or rather brilliantly eccentric, Charles Marowitz.

Charles is a critic, a director and a playwright. He is known for his outrageously, sub-text oriented, collage adaptations of Shakespeare, for his collaborations with Peter Brook, and for being one of the founders, along with Thelma Holt, of the Open Space Theatre. "Sherlock's Last Case" is easily his most successful and most well-known work. Beginning with it's world premiere at the Los Angeles Actor's Theatre in 1984 to it's re-staging in 1985 at the Mayfair and through to it's Broadway run with Frank Langella as the aquiline sleuth, the play has become a regional and community theatre stalwart. Not a brilliant play, but an entertaining couple of hours.The small cast and, basically, single set makes it possible for the most technically challenged regional groups. Doyle purists hate it, regular folk love it. Bonus points to Charles for the highly entertaining "A Background Note" in the acting script.

Regarding his approach to Shakespeare, he was once quoted as saying, "Imagine that Shakespeare's play [Hamlet in the case] is a precious old vase, and someone comes along and smashes that vase into a thousand pieces. If one were to take those pieces and put them back together, the arrangement would be new. That is, I suppose, what this (production) is. Shakespeare provides the vase and I provide the glue."  The problem with this construction method is that you take a perfectly good vase, smash it to bits and hope it holds water, or even flowers, when you are done putting it back together. Of course, with Marowitz, what he ends up with isn't Shakespeare. It's Marowitz. No matter what you think of the process or the product, he has created something new and done it with flair, panache, daring and confidence.

Love him or hate him, Marowitz is one of those guys that makes the Theatre entertaining. (emphasis intentional). For a couple of years, he wrote an immensely enjoyable blog entitled, An Actor Prepares. I haven't seen a new post for over a year now, but I hope he returns to it if he is able. He is witty, sarcastic, stern, intelligent and more  than a little opinionated. Anyone remotely interested in the stage should read a little Marowitz every once in awhile. He will help remind you why you were drawn to it in the first place. Of course, if you are like me, you may also think that he's absolutely full out it occasionally, but so what? Aren't we all?.  One of my favorite entries is one of the earliest: APHORISMS FOR THE YOUNG (AND NOT SO YOUNG) ACTOR. (I'll be stealing some of these for my Facebook updates.)


Now, Charles Marowitz wouldn't remember me from a ham sandwich (figurative and literally), but I have remembered him, followed his work and enjoyed his writings lo these many years later. The world needs more Charles Marowitz's. Those glorious eccentrics who actually have something to say and say it in their own unique way. If we don't get it, that's our problem.
Posted by Wayne Watkins at 5:12:00 PM 1 comment:

Non-Traditional Casting: My Crisis of Conscience 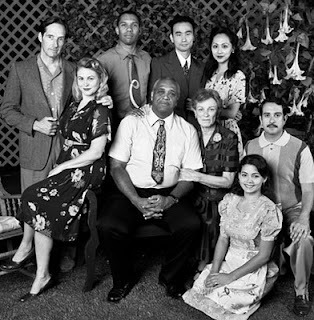 I've talked about this subject before. However, a recent article in the LA Stage Times got me going again.  Here's the elevator speech if you don't want to click and read the whole thing: Joe Stern (whose work I respect very much) of the Matrix Theatre Company (a stalwart of the LA theatre scene for 40 years) is mounting a multi-racial production of Arthur Miller's All My Sons (in my opinion, one of the finest American dramas ever written).

Those who know me well, know I have long been a proponent of color-blind casting whenever possible. There are too many fine actors of color not to allow audiences the privilege of seeing them ply their craft. However, I'm am truly struggling with the application of this concept to historical works. Or rather, works that rely on a very particular set of historical or cultural circumstances that by their very essence require a particular outlook towards casting.The desire to include racial diversity in our casting decisions should never be forced or seen as a marketing strategy. It should be organic and true. It should make sense given the time, place and circumstances of the play.

Now, in the case of many Shakespearean plays, we can adapt them, bend them, twist them into a concept that supports a multicultural cast. Easy-peezy-lemon-squeezy with The Tempest, Much Ado, Twelfth Night, or Midsummer Night's Dream. But even with the Bard, there are some plays that, if done straight, just do not work unless the director conceptualizes them away from their original history and deals with that shift in a creative and justifiable way. Julius Caesar, all the Henrys, Richard III, and Coriolanus for example are real people from a particular place in history.

Now Joe Stern is no dummy. He knows what he's doing and even in the article, he specifically states the challenges he faced in casting this play the way he did. The play was written in 1947 and takes place in 1946 with World War II still fresh in everyone's mind. It is set in the Midwest, where a racially mixed neighborhood was, well, let's just say, highly unlikely. Granted, the issues examined in this play are universal and large. Which then begs the question, what does the casting do to advance the meaning of the play?

Now, I'm pretty confident, there will never be a mixed race cast of August Wilson's The Piano Lesson. Nor should there be. David Henry Hwang's first play, FOB, must be cast is a particular way. It is too specific. How are those plays any different that the Miller play? Does age make it susceptible? Are the concepts presented by the drama so large and universal that casting really doesn't matter? Just thinking out loud, I guess.

You see, for me (I think, any way...at least right this second) we have become so concerned about non-traditional casting that we fail to advance the real issue. Playwrights must write for a multicultural society. Producers must nurture playwrights of all nationalities. Film, TV and the theatre must continue to fight racial stereotypes not just by selective casting, but by play selection. The issue is really about creating for a multicultural society in the first place, instead of trying to shoe-horn multicultural casts into existing works of the theatre.

Then again, I guess what I would really like is that it wasn't an issue at all. The best actors would get the part regardless of race, color, creed, or sexual orientation. I wouldn't have to think then.

Oh yeah, go see All My Sons at the Matrix: Here's the website for tickets. Regardless of what I may think I believe at this moment in time -- this is a great play, with an excellent cast, at a theatre known for exceptional productions. I'm going. Maybe it'll help me sort things out.
Posted by Wayne Watkins at 4:50:00 PM No comments: