I am NOT a writer. 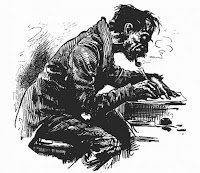 Just needed to make that perfectly clear. Occasionally, I write things down but that doesn't make me a writer. My grammar is horrendous, I rarely complete a thought and I wouldn't know pronoun from an adverb.

Most of the time I just need to log a thought or make sure that some genius idea that just flashed in my brain gets captured in a way I can take credit for later. But a writer? No.

Writers are special. My wife is a writer. She can take a concept or a story or an idea and translate it through the written word that is engaging and funny and exciting and clever and thought-provoking. She can tell a story. I can tell a story, too, but I actually have to TELL it. Can't WRITE it. If I tried, it would come out like a really long nonsensical limerick.

Here in Hollywood there are about 187,295 writers. There are probably only around 2500 actual writers. The others are just like me, but can't face the fact that they suck. Me? I can face that fact very well. There are other things I am very good at, so the fact that writing is not once of them bothers me not in the least.

Just because I cannot write myself, however, does not mean I do not recognize good writing when I see it. I do. Kind of a dick about it, too. Nothing bothers me more than when I see a movie or a read book where the writing is worse than anything I could produce. I can fume for days. Just won't let it go. "How did that get made?" "Who publishes this drek?" "What knucklehead executive green-lighted that POS?"

Blame the internet, blame education, blame Congress. I know, blame Hollywood. That's it. Maybe if the popular culture that Hollywood creates would be a little more discriminating about what it churns out, there might actually be more reason to expect good writing.