Sometimes you lose stuff. You just do. Nobody's fault. Shit happens. A cuff link rolls off your dresser and gets sucked up by the vacuum. A ten dollar bill sails into the wind as you're pulling out your car keys. The world is cruel sometimes. Your Star Trek NCC-1701 Enterprise Pizza Cutter gets accidentally thrown away with the last pizza box. Good thing it was a gift or you'd be pissed off.  It was pretty cool, though. (Stop laughing. Have you ever SEEN one of those? They are COOL.) 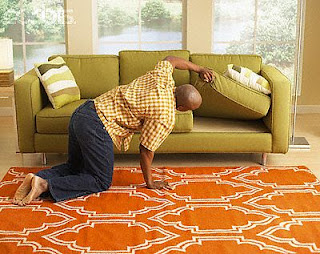 Sometimes other people lose stuff and you find it. That's exciting. Occasionally, a little uncomfortable. I found a $100 bill once. I felt guilty for a month afterwards.  The poor sod probably needed that C-note for something important.


However frustrating losing something may be, when you find it again, the joy is immeasurable. Especially if you find it on accident. The tale of loss and recovery becomes epic. A party story told over and over again to rapt throngs. The cuff link winds up in the cat's litter box. (Yeah, don't ask. It's a mystery.) The ten-spot ends up blowing against a rose bush getting stuck on a thorn for a week and returned to you by your gardener. (Who clearly could use the money more than you). The pizza cutter mysteriously appears years later on the same day the new Star Trek movie opens. (Kismet.)

Sometimes, just sometimes, you will find something without having lost it at all. A relationship, a love, a friend, a memory. One of my very best friends from high school reconnected with me via a phone call out of the blue. I had forgotten how much that person meant to me and, strangely, still does. While I didn't actually lose him as a friend, I found the importance of him again. As a result, that simple little action of a phone call, we have gotten back in touch, have spoken many times and actually took the time to meet after a million years and visit for a while face-to-face.  So fun and heartwarming, really.

For those who read my posts or follow me on Facebook, you will know I "found" a daughter I didn't know I had. More accurately, she found me. While I didn't officially "lose" her, the change in our lives once we found each other was profound. I would daresay miraculous even.

Just last year, I had the pleasure of finding some "junk boxes" my mother had kept over the years. She kept Mother's Day cards from the 90s, birthday cards from the 80s, newspaper clippings from the 70s. Letters from her children. Not junk at all. At least not to her. What I really found was what my mom had held dear throughout her entire life. Memories.

It's not that I really needed that Star Trek pizza cutter. I mean, really, it's a pretty limited utensil. It was just awesome to look at, to hold, to have. It was fun. Naturally, I was able to cut pizza after it went missing. I bought a new pizza cutter at Ralph's. It worked. Cut pizza. I forgot about the lost item pretty quickly, to be honest. Until one day, you move something or clean out a drawer or rearrange a cupboard. Hum. What's...that? Hey, it's my  Star Trek NCC-1701 Enterprise Pizza Cutter! Then you cradle it like a long lost love. The memory of losing now itself a memory. So glad I got a couple DiGiornos in the freezer.  Now, where'd I put that corkscrew?

Every homer hit in the course of the recreation bought him again $5 of his authentic funding. Since the Cards slugged five dingers of their win, Kevin was solely out the $2.50 “vig,” a 10 percent penalty paid on shedding bets. For example, it took me about 30 seconds of scattershot tapping in the DraftKings app to place collectively a seemingly cheap sequence of hypothetical bets totaling $30 that could've netted me more than $100. I didn't place them, but one press of a button would've modified that. As the clock ran down at the end of a largely 1xbet boring soccer recreation, it turned clear to me that, as a factor of mathematical impossibility, Akers would not score.