Sport is Competitive, Acting is Not. 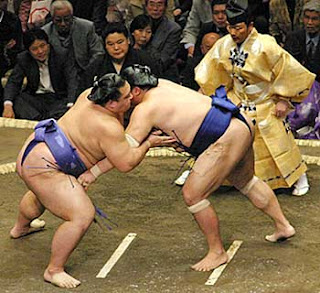 So, I'm eavesdropping on some actors in Santa Monica. Not intentionally, mind, but I'm always drawn to actors and their musings about what it takes to "make it" in the business. I find it rather comforting that the conversations haven't changed at all in the 30 years since I left acting school. Only the slang is different. [First, let me just go an a little mini-rant: Since when can out of work actors afford to eat at the Broadway Deli? I mean, come on, 12 bucks for breakfast? Whatever happened to the starving artist thing? What happened to endless coffee refills at Denny's? Charming the waitress at Dupar's for an extra egg? Instant oatmeal (that you swiped from your ex-who-is-still-your-roommate-cuz-you-can't-afford-to-move) and Folger's coffee? Okay, I'm done.]

Handsome Leading Man is talking to Quirky Character Guy about his latest audition. After a few common pleasantries - they obviously are best friends and see each other often - the chat starts something like this:

In nature, there is competition galore. Competition for food, for water, for mates, for shelter. The winner in this primal contest is always measured by something tangible -- measurable. The strongest, the fastest, the biggest. In business, competition is defined in terms of price, quality, value. And in sport, competition is defined in even more specific and measurable terms: points, speed, strength, accuracy. Acting, indeed all of the arts, is not measurable by any real standard. In all acting, whether or not you are cast in a role has very little to do with how good an actor you are. It has very little to do with your training or your resume.When you go "head-to-head" with other actors for the same role, the best actor doesn't always win the part. The arts are defined by like-ability not talent. That is not measurable. (Please do not get me started on the latest catastrophe on Dancing With the Stars. That would totally prove my point, but I'm still too upset to talk about it. Brandy got robbed. It also seems that in a show called "Dancing With the Stars" one would have to do the former and be the latter. Bristol Palin doesn't and isn't. There. I feel better. For now.)

Casting people will deny this. The good ones will anyway. But it is true.

Poor actors. We spend so much of our lives auditioning and preparing to audition. While it's part of the job, it is not part of the craft. The pressure to do well at an audition is huge. Our very livelihood depends on it, to say nothing of our self-esteem. But after we spend years training, after we prepare countless monologues and songs, after we walk through those studio doors to face whoever is doing the casting -- none of that matters.In a matter of seconds and certainly before you open your mouth, the casting people have already come to some conclusions about you. Height, weight, skin color, demeanor, posture, too handsome, not pretty enough, boobs to small, feet too big, freckles, pasty, blond, brunette, glasses, the list goes on.

Imagine if American football were played like this: Both teams arrive at the stadium. Everyone warms up. Then the offense takes the field alone and runs a play that they feel would score a touchdown if they were actually playing a game. Then the other team comes out and does the same thing. The officials then confer and decide who they think would win the game. That's casting.

Competing for a role. It's a common phrase. We use it all the time. Hell, I've used it before. If you Google it, I'm sure the media uses it all the time. And let's face it, the career of acting is beyond challenging, especially given the fact that, at any given moment, there are a finite number of roles available and hundreds (strike that, thousands) of actors out there vying for them. But the idea of competing for a role is a little misleading. To be honest, it's also unfair for any actor to believe that by shear quality of their audition they will win the "competition" for a part.

What all young actors must grapple with throughout there careers is that their life as an working actor is not entirely up to them. Sure, there's a bunch of things actors can do to increase their odds of being cast, but at the end of the day other people decide our fate. However, an actor's life as an artist IS in their control. Pursue your craft, study, learn, read, stay engaged...TRY. Be persistent and dedicated to what it is you have chosen to do with your life. Understand that. Nobody told you it would be easy.
Posted by Wayne Watkins at 9:29:00 AM