The Lost Art of Kissing (On Screen and Stage)


People kiss. I don't know why and I don't care. Sometimes it's just a little peck on the way out the door in the morning. Other times it's part of a more...uhm...how shall I say this...elaborate ritual. A kiss can be a casual greeting accompanied by friendly pleasantries. A kiss can be a gentle reminder that the other person is in your thoughts. Then again, it can also be the culmination of an emotional journey that suddenly runs out of words.

It is a natural and, very often, intimate thing that happens countless times every single day the world over. Not all cultures kiss, this is true. A study that appeared in American Anthropologist in 2015 found that out of 168 cultures that were studied, only 46 percent of them kissed in a romantic sense. (And to answer your next question, no, I do not spend a lot of time researching these kinds of things. I just figured that I needed a little extra weight to this post, so I Googled some shit.) Thankfully, most of us weren't raised in those cultures and find kissing pretty great. 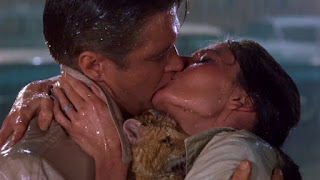 Funny thing is, kissing is something that is much more fun to do than it is to watch. That might be a good thing. It would be kinda pervy if we all walked around watching people kiss all day and laughing under our breath. In fact, we'd probably wind up in the county slammer on some sort of public nuisance charge if we got caught doing it too much. Doubtless, I'd be the first one arrested. The director in me would want to choreograph that couple in the restaurant or the lovers at that table in the corner. "Buddy, look, put your fingers on her jaw and let them slide to the back of her neck. Slowly. Slower." "Young lady, you're spending too much time biting his lower lip. Tilt your head more. There. Perfect."

In the cinema and at the theatre, however, it's okay to watch. A well-designed kiss can transport us into the very heart of the characters we watch. "Breakfast at Tiffany's," "To Have and Have Not," "Gone With the Wind," "Casablanca," "From Here to Eternity," "It's a Wonderful Life" all have kisses that define the relationship of the characters we've been following for two hours. If executed properly by the actors and staged perfectly by the director, they take our breath away as if we were on screen ourselves.

Kissing takes a deft and specific approach on screen to work. Occasionally, even our best actors fail miserably during a celluloid snog. Angelina Jolie and Johnny Depp in "The Tourist," awkward.  Liv Tyler and Viggo Mortensen in "Lord of the Rings: The Return of the King" were smashing into each others noses so hard it looked painful. Adam Sandler kissing Jennifer Aniston, Drew Barrymore, and Jessica Biel. Eeeew. Please. They just don't work. In all of these cases, certainly the directors could have done better in helping the actors find the right moves. (Except for the Adam Sandler ones. Those poor girls.) In fact, it is the director's job to do that. Regardless, the actors are left in awkward moments and the audience is left unfulfilled and often disappointed.

As in real life, not all movie kisses mean the same thing. There are romantic kisses, comedic kisses, dramatic kisses, passionate kisses. Not every kiss should necessarily be sexy, either. Actors have an old adage about how to play an intoxicated person. The secret? Don't play drunk. Play trying NOT to be drunk. Most people who have had too much to drink try not to appear drunk. That's key. Same for kissing. Sometimes it's is the reticence, the waiting, the anticipation of the kiss that makes it work on stage and on screen. Alfred Hitchcock's "Notorious" has one of the most intimate kissing scenes ever filmed. It's not a constant lip-lock. It's not a slobber-fest. It's not a non-committal smooch. It's not a bad-breath-avoidance-stick-and-move. It’s a masterful two-and-a-half minutes staged in such a way as to bring us a long for a very romantic ride. Hitchcock intention was to circumvent the Hays Code of the time. The ludicrous Production Code banned kisses longer than three seconds. So Hitch had them kiss for three, then whisper and nuzzle and go back to another three second kiss. Stop and murmur a sweet nothing, then kiss. Sigh, breath, kiss. Then repeat. Just may be the best screen kiss of all time. If you don't believe me, take a look below. Feel free to try this at home.

The stage kiss is very different from the movie kiss. The stage kiss isn't 40 feet high and in close up. These are normal sized actors (although many stage actors have heads quite large for their bodies, but that's another post entirely) and seen from ten or twenty rows back. There needs to be much more set up. The audience needs to see it coming a little. They need to feel the tension as the characters get closer. On stage the kiss has to be perfectly planned and executed to take advantage of angle and light as well as emotion and character. Timing must be perfect. Not too long, not to short. You can't "fix it in post" like they do in the movies. Hey, this stuff ain't easy.

The best actors pay attention to each other. They feed off of each other. They are professionals doing a job. You don't kiss a "co-worker" in a show the same way that you kiss a significant other on a date. Movie and stage kisses take work. Rehearsal. Usually that happens in front of a bunch of people doing other jobs while you're trying to look all Rico Suave or Pussy Galore. It's not as fun as it may sound and it definitely is not anything your life-partners should worry about. The finished product may look erotic or passionate, but believe me, getting there can be difficult.

Sometime in the 50s or 60s (okay, I just made those dates up because it just seems about right), movies and the actors in them forgot how to kiss. Kissing in the movies was better in the very early days of Hollywood. Perhaps I should say - more effective. In real life, the kiss is either the beginning of something bigger (oh, you know what I'm talking about) or so casual and commonplace it doesn't serve in your daily narrative (that morning peck as you both drive off to work). In movies, and on stage, the kiss is usually the climax to the scene. (Yes, okay, pun intended.)

After "Streetcar Named Desire" in 1951, with rare exception, everything went to shit. I blame Marlon Brando. And James Dean.  Did Dustin Hoffman EVER kiss anyone on screen? Come to think of it, did Paul Newman? Mostly, I blame Lee Strasberg. The screen kiss lost it's fantasy. Strasberg and his "Method" sacrificed romance for realism. (Again, fodder for another post.) We started to see on screen kissing become more and more like actual real life kissing. But, that is not it's purpose. The reason we go to see movies and plays, any art really, is not to have real life replayed before our eyes. It is to experience heightened levels of emotions in heightened situations. To see larger than life people deal with larger than life challenges. To experience emotions on a scale beyond that of our regular life. That is the very purpose of art.

So the message for all my actors and directors out there is this: Never underestimate this important bit of blocking. It can make or break a moment on stage or on screen. Well, actually, that's not right. It's not just for my actors and directors. I'm really telling everyone, pay attention to the kiss.  You, too, can elevate the ordinary to an art form. And.....action!