Whenever my mom would get mad at me she would call me by my entire name. Wayne Caldwell Watkins. I'm sure many moms do this. My memmory of it reminds me of the episode of Star Trek. In "I, Mudd," Harry Mudd is harangued with a stern, "Harcourt Fenton Mudd, where have you been? What have you been up to? Have you been drinking again, you miserable sot! You good-for-nothing...!"

I know that tone. I know the dread and distress that accompanies that full-name exclamation. Yet, I have only heard tell of mothers using this technique on sons. I cannot imagine a mother turning that on a girl child. I don't think it would be the same. I am not implying that mom's don't get mad at their female children, just that it must manifest itself in a much different verbal or emotional form. Let's face it, girl's names are different than boys. They are (I'm gonna catch heat for this, but) prettier. Elizabeth, Heather, Jennifer, Samantha, Dorothy...see, pretty. Wayne, Bob, John, Dave, Paul...not pretty. It would be pretty hard to retain one's anger when saying a few pretty names in a row. How would you even do that? That would be like trying to use a mean voice when saying "unicorn and mermaids," "rainbows and butterflies," "Julie Andrews." You just can't do it.

My beautiful daughter has two beautiful daughters. Both with very pretty names. For the life of me, I cannot image her ever being angry enough to use the "three-name-shout-out" on them. Granted, I'm sure my girl can get heated, but I've never seen it, personally. (That is the dad's prerogative, by the way, to only see in his daughter that which he wishes to see. Given the circumstances of our own personal story, this is even more the case.) Of course, I see perfection: temperance, patience, kindness, support, you know - the perfect parent, the perfect daughter.

Not surprisingly, moms are often placed on pedestals. Even through their brief moments of anger or frustration, they still rise to a level of near-sainthood. Dads, though, are never put on more than a step ladder. Dads are great, don't get me wrong. I absolutely LOVE being one and my son-in-law is a champ, but moms are...well...MOMS! Sure, sure, dads have these stereotypical traits that are, thankfully, not holding up through our societal evolution, but they still exist. Mom uses a cute little spoon to feed the toddler, Dad just shoves a piece of cheese into the teeny little pie hole. Mom reaches down and picks up the fallen banana slice, Dad kicks it under the sofa in order to retrieve it later when nobody is looking. Mom worries about her beautiful ballerina stepping on the seed pod from the sweetgum tree and Dad encourages the same hoofer to jump off the roof onto the trampoline. (No, Eric, this is not really directed at you.) 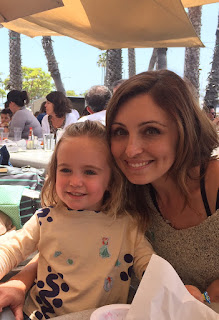 The pedestal on which I have placed my own daughter is very high as a result of her being A) my daughter, as well as B) a fabulous mother, and C) to quote the movie Mary Poppins, "Practically perfect in every way." Yes, I know I am laying it on pretty thick, but if you knew my daughter you would totally get it. Certainly, it is a pedestal she shall never be able to climb down from should she even try. In addition to it's height, I have firmly glued her feet to the cornice. (Well, I think it's called the cornice. Whatever the very top part of a pedestal is called.)

Please understand, I do not say any of this to put any pressure on my beautiful child. She has her hands full just being a mom. Besides, I mean, that would be a pretty shitty thing to do on Mother's Day - heap insurmountable expectations on a person who already is super busy. I say these things because I have seen what good moms do. Including my own mother, of course, I have known some pretty terrific female parents. Moms of twins who, despite the frenetic chaos that two tykes must create, have remained relatively sane even before the kids leave for college. Perfectly amazing moms that have children who are dancers and actors and singers - often all three. These are the road warriors of parenthood, shuttling their talented offspring to ballet class, rehearsal, and voice lessons. While "soccer moms" may be a term not used as often as it once was, we all know what that means -- SUVs filled to the sunroof with smelly shoes, ball bags, and juice-pouch-swilling future Olympians. Then there are the moms who stay home with their gifted science student turning the kitchen into a bubbling workshop of goo and fireworks. And finally, the single moms, who by hook or by crook, raise the most fabulous human beings under the most trying of circumstances.

Moms the world over have sacrificed everything to raise their children. Their own dreams, their own passions, their own health. Moms compromise and juggle. They balance and negotiate. They put friendships on hold and forge new ones. They smile, they frown, they laugh, they cry, they play, they discipline. Sometimes all of those things in the course of a few minutes. So, it's no wonder that every once in a while they would let fly with a torrent of names in an effort to catch our eye or draw attention to the fact that we really shouldn't be pulling the dog by the tale.

My mother has been gone a couple of years now. As a result, I now use this holiday as an opportunity to give thanks for other people's moms that have graced my life. My mother-in-law whose name, appropriately, was Grace. My daughter's mom, Yvonne, who, with some help from her own mother, Violet, raised a wonder woman. Finally, that same wonder woman, Heather, who is the the mother of my two granddaughters, without whom I would no doubt have quickly put aside any celebration of Mother's Day at all.

Thanks for that, Heather. Happy Mother's Day.

Lovely. :-)
And don't kid yourself -- Mothers use that same 3-name-tone with their daughters, too, and yeah, it strikes a chord of unspeakable terror in us, too.
-- Melinda Janette