Back from the abyss -- An Actor Prepared. 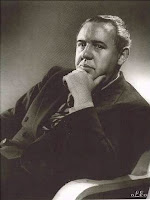 It's been quite some time since my last rant. Part of it comes from finding the time to make this blog a part of my schedule and part comes from just plain laziness. So for the five of you that give a rat's rosy...my most humble apologies for being absent. (And remember: A rant isn't always a negative thing. Sometimes it's a joyous romp through a field in your skivvies.)

Actually, since the election, I've had very little to rant about. I'm happy. Sure, the nature of politics still gets under my skin, Prop 8 just pisses me off to no end, the economy is scary, Iraq and Pakistan and Afghanistan are still a plague. But, hey, at least we now have a leader who can and will actually talk to the rest of the world in complete sentences. It's those baby steps that matter.

Oh, yeah, and I think I'm in love (love may be the wrong word) with a lesbian. Yes, my wife knows and kinda approves. Rachel Maddow. She's not a lipstick lesbian like you see on TV, but she's hot in an I'm-smarter-than-you-and-I-eat-Republicans-for-breakfast kinda way. Her show on MSNBC is a breath of fresh air. Watch it. But I digress....

My wife, Elizabeth, sent me a quote the other day from Charles Laughton.

Charles Laughton was (for those of you don't know) a remarkable British actor. Died way too young as many of the best and brightest do. He also directed a movie -- The Night of The Hunter. One of my favorite movies of all time and, unfortunately, the only film Laughton ever directed. It was a huge flop at the time. Critics panned it, failed miserably at the box office. Today it is considered by many as one of the best movies of the 1950s. It features a completely terrifying performance by Robert Mitchum and a powerfully sensitive performance by the incomparable Lillian Gish. See it. But I digress....

Since about 1951 people who call themselves actors have been having a very passionate, even if not public, debate about what acting is all about. Is there an "American-style?" Is it more effective than the "British-style?" What is "the Method?" Which is better? What the difference? Does anyone care?

1951 is the year that Lee Strasberg took over as director of the Actors Studio. Under his leadership grew what is today known as "the method." So many actors actors have been influenced by the method, it really is impossible to discount utterly -- then Laughton, so simply, throws water on the fire. A photograph versus an oil painting.

For some reason, as an actor and a director, that resonated with me. What is an actors job and how does one do it? Are we out to take a picture and pass it around the audience? Or, are we attempting to use paint and canvas, color and light thereby allowing the audience to stare and wonder -- "Hum, what about THAT?"

And, too, all the arguments in the world pro and con still miss the mark I think. Even my arguments boarder on the simplistic (thank you, Mr Laughton. No, really, thank you). All the talk of "The Method" and the variety of different permutations of it (Strasberg, Meisner, Adler) still fall short of the mystery of acting.

So it is with acting and actors. We simply cannot boil down such a complicated personal process into a "method." With all due respect to those those who teach such things, perhaps, rather than trying to teach young actors how to become the next Brando, we should be teaching them how to become the first (their name here). Maybe we should be teaching them about the tools they have as human beings: How to breath, how to use their voice, what they can do with their body and their mind. Maybe we should teach them to read and write, to observe and participate in the world. Maybe we should teach them history and literature. Maybe we should teach them to live and love and care for things. Then, once we do that, let them discover how they wish to use this mighty, highly tuned instrument in Shakespeare or Mamet or Chekov or Simon. But, I digress....
Posted by Wayne Watkins at 3:54:00 PM