Actors and Me. Musings on Fraternity.

I work with actors. Often I produce plays that have actors in them. I direct actors quite a bit. I also coach professional actors and teach young actors. Sometimes I act with actors. I have done all of these things with actors for well over 30 years. I have rarely been disappointed when doing this work.  Yes, I have a day job to pay the rent, get the suits cleaned, buy some plants for the garden and food for the fridge, and occasionally take my beautiful and talented actress wife on a swanky date. This work I do with actors does not fill my wallet. Not even close. However, these collaborations do fill my soul. They make me laugh. They make me cry. They make me think. They challenge me and make me better. Actors and the work actors undertake are one of my deep passions. I care about them. Their work, their psyche, their bodies, their voices, their health, their joy, their exuberance, their commitment, their intelligence, their opinions. Them. I care about them. Even the ones I don't much like, I still care about.

I AM referring to people who know how to use their voice. People who can speak properly and be heard in a theatre. Women who can project while wearing a corset and men who know how to walk on a raked stage. People who have been in a dark rehearsal room with other actors pouring over lines and movement and gestures. People who refer to a cigarette and a Diet Coke as "dinner." You know - Actors.

In my relationships with and between actors, even after all this time, I am still taken aback by the passion that actors have about what they do. Most recently, there have been two instances that have made me at once proud and so full of hope for the future of my tribe, my band of brothers and sisters, who have chosen these impossible careers. 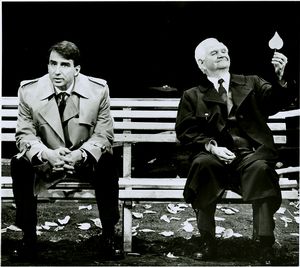 The first is what I'll refer to as the "intimate theatre debate" occurring here in Los Angeles. For those unfamiliar with this ruckus, suffice it to say that a very large number of actors in LA are at odds with their own union about whether or not actors should be allowed to work for free (or close to it) if they so choose. The actors want to be able to make that determination for themselves. The union (Actors' Equity Association) says, no. Actors must be paid a minimum (regardless of budget or revenue) or else suffer not working under the protections of the Union. [For the sake of this post, I am dramatically oversimplifying this debate, obviously. For more info click here.] What has happened over the course of this argument may be more significant than the end results of Equity's action. The actors (several thousand of them I might add) have rallied together in an amazing display of solidarity as ARTISTS. They have communicated intelligently and passionately and (for the most part) civilly about this work they do as a community. Theatre artists and intimate theatre companies have joined their voices, and in some cases their very memberships, to support the idea that actors are special and have unique needs and requirements and consideration. From the very famous with lengthy careers to those just starting off on this arduous path -- they have joined together to control their own artistic destiny. Basically, making the case that the manner in which they pursue their art is just as important, if not more so, than money. I have never been as proud to be a member of this community as I have in the last several months. While the outcome will certainly affect me as a producer, the unity, collaboration and homogeneity of the theatre community in Los Angeles has been staggering. And beautiful.

The second occurred 1000 miles away in Portland, Oregon. Several times a year, I am asked by a few theatre companies and a couple universities around the country to come and hang out with their actors. Sometimes a couple days, sometimes a few hours. We call them "master classes" or "workshops," but I like to think of them as collaborative skull sessions where a company just gets a different perspective (mine) on their work or process of work.

Usually, when someone like me comes in to work with a group like this there is some initial resistance. I mean, let's face it, I'm not a household name in the theatre world (nor do I want to be), I don't have a book to sell, and I do not posture or pretend to be some kind of guru. I'm not. I'm just a theatre guy that has some experience and knowledge that some actors might find helpful. Hopefully, I can communicate it in a meaningful way to the actors around the table.

This particular group of actors seemed different, though. Experienced though they all were, they appeared open and available. (Each one of them also happened to be very talented, but that's a whole other subject.) I'm sure they had their questions about me. I had worked extensively with one of the actors (he's is the reason I was there in the first place), but the rest didn't know me from Adam's off ox. Yet, here they were for two days listening, questioning, applying, investigating new techniques. Challenging themselves and each other to get better, to learn, to experiment. Remarkable. And beautiful.

Two groups of actors separated by size and distance. Each proclaiming to the world and themselves that what they do has merit, is important, and should be constantly nurtured and improved upon even in the face of impossible odds.

Who does that? Actors do. And I love them for it.