A Rant About Unprofessional Actors (Warning: Prepare for F-bombs)

I can't help it. I'm usually not like this. I mean, it really takes a lot to get me really aggravated. Seriously, I don't even send food back at a restaurant. Sure, if there is a Brillo pad baked into the bread or a used condom masquerading as salmon in Dragon Roll, yes, I'll raise my hand and try to get the server's attention. However, there are a few things that just piss me the fuck off. (I did warn you.) Some little, some big. For example, people who don't say anything when they are trying to squeeze by you in a store. Say something. "Excuse me." "Pardon me." "Move your fat ass, buddy." Something! Don't just stand there and get all irritated because I'm not clairvoyant. And don't exhale in exasperation as you pass by. That only pisses me off more. Here's another: Drivers who speed up when I turn on my blinker. Really? You're not gonna let me in and you are five cars back? You are gonna speed up just to let me know, what? You're so important that a little freeway courtesy is beyond you? Maybe you're in such a hurry that those extra two car lengths on the 405 are gonna make a difference to you getting to Target before the rush starts? Puh-lease. Asshole. Oh, yeah, those little stickers on produce? Fuck those. You ever try pulling those off a pear or a peach? Who invented those anyway? Ugh. Oh, and then, someone had to invent special printers to make those little fucking labels AND the special machines to put the little bastards on the fruit. No wonder avocados are so expensive!

Admittedly, those are mere annoyances that I wish could be remedied by civility or, in the case of those sticker-thingies, technology. There are, however, some things that are simply inexcusable. Actors, listen up. Specifically younger actors. I would hope the old pros out there would never do this, but who knows. I'm casting a play. I have cast many plays in my day, but this was a shock. A real wake up call. I put out the requisite casting notice in the trades. About 100 actors submitted for one of the roles. I invited twenty of them in to audition. Of those twenty, ten actors confirmed. The other ten didn't bother to respond at all. I sent the ten actors (who were professional enough to respond to an invitation to audition for a play they had submitted to) their times and their audition material. One of the scheduled ten contacted me the day before the audition and asked if he could reschedule because something important came up. Fine. No problem. The day of the audition arrived...two actors showed up to audition. Seven just blew it off. No call, no email, nothing. They just chose not to show up. 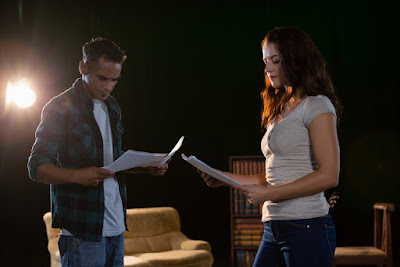 Why would anyone do that? People talk and people remember. Additionally, you never know where something might lead. My own company, for example, is work-shopping this new play (the one we're casting for), we have two movies going into production, we are working on a TV series, and we are planning a theatre season for 2019. As petty as this sounds, I will remember every single person who failed to show up, didn't call or email to cancel. Sad to say, I'll probably remember them more than the people who actually showed up, gave me their all for 3 minutes and didn't get the part.

Guess who I ended up casting? The guy who rescheduled. Why? First, he killed the audition. Second, I knew he was professional and would probably treat the role and the play with respect.

The business part of being an actor is hard. Really hard. It is as difficult, if not more so, than any other career. If you called a plumber and he never showed up after confirming a time to fix your sink, would you ever call him again? If you missed half a day of work for the cable guy to show up in that asinine four hour window and he never called but just didn't show up at all (okay, maybe a bad example), you would, at the very least, be somewhat annoyed. Do yourself a favor and treat your creative career like a profession not hobby. If you truly love what you do, afford it the people in the position of getting you work the same respect you would any other professional. Don't make me have to write something like this again.