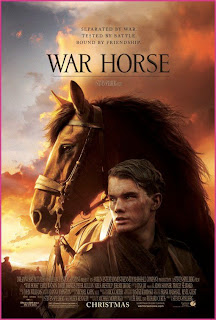 Movies are manipulative. They are intended to be. That's why we go to them. We accept the fact that a good filmmaker, and even occasionally a bad one, will help us escape into our imaginations for a couple hours. We'll get to go to Pandora and have an adventure with sexy blue aliens, we'll fall in love with Sandra Bullock or Ewan MacGregor, we'll rob a casino with George Clooney, we'll even team up with Samuel L. Jackson and try to retrieve a suitcase stolen from our mob boss. We go to the movies to be swept away. Don't we?

My wife and I went to see War Horse this weekend. This film is based both on a 1982 children's book by Michael Morpurgo and a 2007 stage adaptation of the book (originally mounted at the Royal National theatre in London and now on tour in the U.S.). The movie was directed by Steven Spielberg, music by John Williams, produced by Dreamworks & Disney, blah, blah, blah. You probably know all this is you follow movies at all.

We left the theatre in a shambles. In fact, everyone in the theatre was a wreck. It is a beautiful, old-fashioned, sentimental story. A fabulous story that, yes, manipulates you -- at times to tears. If there is one thing Spielberg knows, it's timing. He has a masterful way of letting you breath in a movie between emotional high points. He knows when to soften a powerful scene with a bit of humor and how to make the character of a horse move you to tears and cheers and gasps.

But as we were walking out of our little neighborhood cineplex, we overheard another couple ask, "Why hasn't this movie done better? Everyone would love this picture." Why, indeed? When we got home, I flung open the iPad and Liz sat at the computer. We both started looking up reviews to find out what the problem was. Very quickly, we found the answer. Thanks to Rotten Tomatoes, Metacritic and a few other movie buff sites we frequent, we saw that this film was favorably reviewed by only 75% of people, we'll call them critics, who were writing about it. A full 25% did not like the film or found big flaws in it. How is that? How could this old-fashioned, sentimental beauty of a movie not score higher by everyone who loves movies?

Then it hit us. Like a ton of bricks. It's old-fashioned and sentimental. More John Ford than Christopher Nolan. The "user" reviews were occasionally shocking in their assessment of this movie. Boring, bland, awful, tedious, saccharine, poorly acted, trite, laughably bad. Wow. Granted, we don't know who most of these online "critics" are. No one uses their real name on the internet. But they certainly didn't see the same movie I saw.

Of course, art is subjective. I get it. Some things just may not be your cup of tea. But reading these 25% reviews, I found myself getting rather sad. My fear that we humans (at least a fourth of us, anyway) are denying ourselves the very things that make us human. The ability to empathize, to feel, to imagine. To view art, or life, openly and without filters. Letting it smack us right in the face and permitting our reaction to surprise us then taking it all in and allowing it to wash over us. Certainly, there are some of us who feel the need to cower in our shell and deny our feelings. Some who won't cut loose and risk the chance of their emotions rendering them silly or uncool. Some who don't rage or scream or recoil in fear or sob uncontrollably in the dark. Some of us are above that. Too cool, too considerate, too cynical of any thing that might smack of sentiment.

War Horse began life as a children's book. A successful one. So, I only can assume that kid's get it. But where does that innocence go? When do we pound out of our children the very thing that makes them, and us, human. Do we actively deny ourselves the ability to experience catharsis or are we programmed by others to stop it up. Sentimentality is not a bad thing. If you haven't already, go see War Horse. It's not a "war" movie. It's a story about a boy and his horse and how that horse touches others during a frightening time. I suggest you do with this movie what I advise all my acting students do with art in general: Don't judge too quickly. Let it wash over you in the dark. Allow it to manipulate you. That's why we go to the movies.
Posted by Wayne Watkins at 12:21:00 PM