Why You Can't Read Plays 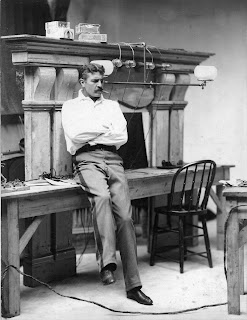 I was going to title this post: "Shakespeare Should Never be Taught as Literature." Then I thought some people wouldn't read it thinking it might only be about Shakespeare. Then I thought I'd be sneaky and call it "Never Read a Play Again!" in hopes that high school and college students would read it trying to get out of yet another assignment where they would have to analyze a boring drama by some dead guy who always wore a suit and tie.

Then a miracle occurred.

My wife found the following excerpt in a old theatre program. So instead of coming up with thoughts of my own this week, I'm just going to cheat and let you read what the legendary William Gillette had to say about reading plays. It's from his book, The Illusion of the First Time in Acting (New York, 1915, printed for the Dramatic Museum of Columbia University). You can get the ebook on Google Books for free. It's an excellent read for any student of acting, actual actor or theatre historian. So...read on:

"Incredible as it may seem there are people in existence who imagine that they can read a Play. It would not surprise me a great deal to hear that there are some present with us this very morning who are in this pitiable condition. Let me relieve it without delay. The feat is impossible. No one on earth can read a Play. You may read the Directions for a Play and from these Directions imagine as best you can what the Play would be like; but you could no more read the Play than you could read a Fire or an Automobile Accident or a Base-Ball Game. The Play -- if it is Drama -- does not even exist until it appears in the form of Simulated Life."

I have always railed against the teaching of Shakespeare (all plays, actually) in an English class. It is ultimately pointless. Plays are not meant to be read as literature, they are meant to be performed and seen by an audience at that moment. Each performance has the potential to be different from the night before. For the audience, and the actors, a play in performance is visceral. They are meant to be experienced then dissected. Didacticism must follow that intimacy of sitting in the dark.

Imagine trying to teach a class in cinema without watching some movies? A cooking class without food? Can't be done. Same with plays.
Posted by Wayne Watkins at 5:43:00 PM